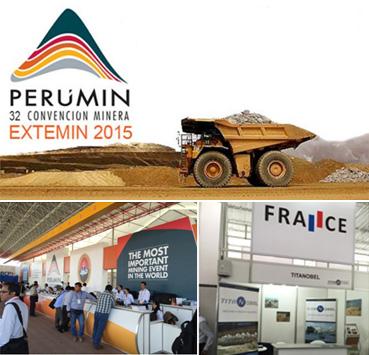 The PERUMIN show took place in Arequipa, at the heart of the Peruvian mining activity, from 21 till 25 September 2015, and gathered all the actors of the mining sector in Latin America.

Organized by the association of the mining engineers of Peru, created in 1943, the PERUMIN is one of the biggest world events of the mining sector.

For several years TITANOBEL resolutely turned itself to international development and counts numerous references today, mainly on French-speaking Africa, in supply of explosive products manufactured in France but also in bulk explosive on-site manufacturing with drilling and blasting service. TITANOBEL turns itself now to Latin America and its enormous mining potential, with the opening in July, 2015 of a commercial office in Bogota (Colombia)