The mining market: sophisticated and dynamic

The mining market is the main consumer of explosives for in the world and includes a variety of specialized products such as bulk explosives charges, electronic detonators, firing software. The mining industry is at the cutting edge of technology in terms of the application of explosives and drilling for rock-breaking purposes. Titanobel’s expertise enables it to successfully support this market.

Exploiting mining resources led to global industrial development in the 20th Century, and is currently contributing to the emergence of new global players in Africa, Latin America and Asia. Explosives are, more often than not, essential for extracting minerals, at increasingly large mining sites in areas that are sometimes very remote. Mining is the first operation for processing the minerals and, whether underground or open-cast works are involved, mining companies are faced with an ever-increasing demand to optimize the results of blasting operations.
Titanobel supports this demand all over the world by offering customized solutions suitable for all situations: on-site explosive production, electronic initiation, technical support, providing turnkey charge and supply services, design and supply of specific equipment, adapting the explosive formulas to site geology, extreme weather conditions, etc. 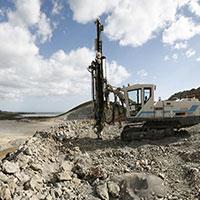 Nickel mining in New CaledoniaFrance is still a mining country

France’s history was marked by large-scale mining of coal and iron up until the 1980s. Today there are very few mining operations in mainland France, but in the French Overseas Departments and Territories there is great potential for exploration and mining operations.
In New Caledonia, nickel mining is one of the cornerstones of the local economy, and makes France the 7th-largest producer of nickel in the world. Titanobel has a presence in this market, working in the mining drilling sector along with its subsidiary NSD Sofiter, which operates the Koniambo site.

In French Guyana, gold is still not mined industrially to any great extent, although major deposits have been identified. In the near future, these deposits will make French Guyana one of the leaders in this sector. Along with Guyanexplo in Kourou, Titanobel produces industrial explosives which are distributed in French Guyana and across the French West Indies.

Mike Leyland is our regional manager for South Africa. Based in Johannesburg, he has 30 years of experience in the mining sector and provides us with his first-hand account of the mining business in Africa.

What is the situation with the mining business in Africa?
The situation is very different in the various regions where mining activity is ongoing. Southern Africa is highly developed in terms of mining, with numerous projects coming up every year in spite of a difficult economic conditions. In West Africa, several countries are major producers of various minerals, although new projects there are much less frequent.

What minerals are mined in Africa?
Here too, there are many contrasts. You find nearly all the information in Mendeleev’s Table in Africa: uranium in Niger and Namibia, bauxite in Guinea, iron in Mauritania, diamonds in the DRC, coal in Mozambique, copper in Zambia, gold in Ghana, etc. And then there is South Africa which, today, is the most highly diversified country in terms of the minerals mined. Mining in South Africa is done using both surface and underground methods, narrow reef as well as massive mining.

What are Titanobel’s strengths regarding the African market?
Titanobel has highly innovative on-site manufacturing solutions that provide exceptional flexibility, through to production of explosives in cartridges directly on the mining site. These technical solutions are particularly well suited to regions involving complex logistics, such as uranium mines in Niger, where Titanobel has developed partnerships with mining operators.
Having a French-speaking culture is also an advantage on a continent where French continues to be very widely used. Having a production unit established in Nigeria is also a significant advantage. 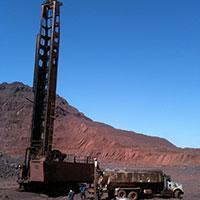 While Africa can still be considered to be an emerging continent in terms of mining activity, Latin America has had a substantial mining industry for many years now, with leading countries being Peru, Chile, Brazil, Columbia and Mexico. It is within this region that we are observing the greatest number of investments in mining operations.
In addition to the production of explosives carried out with Guyanexplo in French Guiana, Titanobel has established a sales representative office in Colombia to develop its lines of business in Latin America.